Lyricpro-The Songwriter's Software had a unique Slant-Rhyme Dictionary at its core. I hope one day to make this dictionary available online, hopefully for free. In the meantime, below is the information about slant-rhymes. 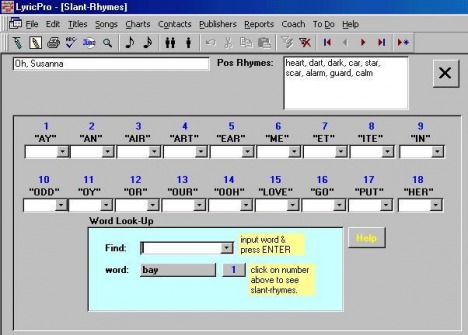 To give you an example of slant rhyme, following is a list of all the possible rhymes for "heart":

Although, some of these words may seem a little far-fetched, it is sometimes more important to find the right word for the phrase instead of just the exact (and in many cases predictable) rhyme. How many times have you heard "heart" rhymed with "start"? More interesting to rhyme it perhaps with "star" or "dark" (although these have been used a lot, also). Why not something like: "This is the storm before the calm, this is the moon before the heart". I have no idea what that means but it's all I could think of right now. The point is, thinking in terms of slant-rhymes will expand your rhyming possibilities.

HOW TO USE THIS SLANT-RHYME DICTIONARY:

I put this program together because I was tired of leafing back and forth through rhyming dictionaries for slant rhymes, imperfect rhymes, off-rhymes, or whatever else you want to call them. Unable to find a useful rhyming dictionary which included imperfect rhymes, I decided to compile my own true Slant-Rhyme Dictionary. While I was at it, I tried to include only those words which could remotely be used in most kinds of songs. I actually could have safely taken out many more words than I did, but I didn’t want to take my own editorial license too far. Further, the vast majority of rhyming words in most songs contain single, double, and some triple syllables. Although I have included words with four or more syllables, I tried to keep them down to a minimum. I believe you will find most of what you’re looking for in this small book. There are plenty of good conventional rhyming dictionaries out there if you need one.

In all songs, and especially Country songs, the use of slant-rhymes opens a whole new world of possibilities. A writer can rarely get away with rhyming "heart" with "start", or "apart" anymore, but here you will find no less than 63 rhymes for "heart". Likewise, you will find 228 rhymes for "love". Just keep in mind that the most important thing in Country music is for the lyrics to have a conversational quality, to not draw too much attention to themselves, to not be too "clever".

What exactly is a slant-rhyme?

In its most common form, a slant- rhyme shares the same vowel sound but different ending consonant sounds. I have grouped these slant-rhymes (assonant rhymes) by ending family. Generally, you will first want to try to find a perfect rhyme, then rhymes with the same family ending; plosive (b, d, g, k, p, and t), fricative (ch, f, j, s, sh, v, z), or nasal (m, n, ng), and then, any slant-rhyme that works. First you will find the open vowel-sound endings such as "day" or "say"; then the "l" sound such as "fail" and "pail"; then, the ‘r" sound such as "clear"; then the plosive family, "b", "d", hard "g", "k", "p", and "t"; then the fricative family, "ch", "f", "j", "s", "sh", "v"," "z"; and finally, the nasals, "m", "n", and "ng". One syllable, two syllable, and three or more syllable groupings are provided for convenience. When in doubt, just find right vowel sound and then go down the list compiling words that might be useful in your song. I think that finding the word that best expresses the idea of the lyric is more important than finding a perfect rhyme, although it’s always nice when you can do both. Also, remember it is very important to use a rhyme which doesn’t force the singer to place the accent on the wrong syllable of a word. You wouldn’t want to rhyme "ring" with "dreaming" for instance. It would be far too distracting.